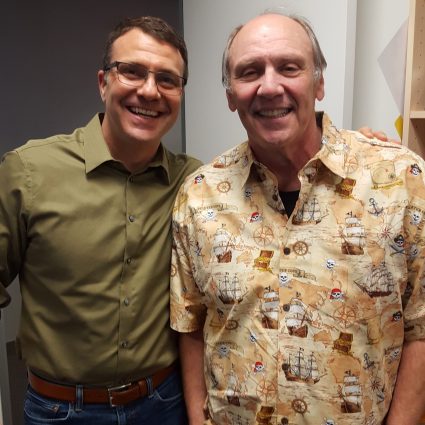 Bill Handel, local and nationally syndicated radio personality, joins Tom Smith for MtP 002. In this episode, Handel shares his incredible story of combining a building contract gone bad with a new law degree and turning that into a wildly successful broadcast career! The Bill Handel Show can be heard on KFI-AM 640 in the Los Angeles market Monday through Friday from 6AM to 10AM and Handel on the Law can be heard Saturdays in Southern California and in more than 300 markets across the United States.

Bill Handel: With a radio program or a radio campaign, you’re talking to the world and especially when you’re dealing with a station like KFI. It’s 50,000 watts, it’s a blow torch, it’s heard all over. Not only does it work but the ratings, its a million and a half people, it’s a lot of people. So the market has to be crafted, the commercials have to be crafted very carefully.

Tom: Welcome to Meet the Personalities, the Podcast where we sit down with radio personalities for a candid talk about their take on the business of radio. I’m your host Tom Smith, LA Radio Specialist, and today I’m joined by the one and only Mr. Bill Handel. Bill has been a mainstay on the radio stage both in the Los Angeles market as well as across the country. I’m absolutely flattered and honored to be speaking with him today. He can be heard…

Bill: As well you should.

Tom: Bill you started in radio by way of, I believe Handel on the Law.

Bill: Actually that was my first Job, was Handel on the Law. That came out of my legal practice, and my legal practice was third party reproductive law. That was my entire legal practice. Surrogate parenting, I started surrogate parenting in 1980. I developed, wrote one of the very first surrogate mother contracts that existed. And I was a guest on so many shows over the course of the years that I finally was, five years later, asked to do my legal show. As a matter of fact if I remember, if memory serves, and I think this is right, program director of KBC at the time where I first started. I remember walking down the hall, and he turned to me and said, “Bill I’ve been listening to your interviews, you know you’re better than half the people I have here.” I said, “No, no, no, I’m better than all the people you have here.” And I got Handel on the Law. I’ve been doing that ever since. So starting at KBC and then coming here…well, actually I was fired from Handel on the Law in 1987, and then in ’89, KFI brought me aboard to re-live, Handel on the Law. So I’ve been here at KFI since 1989. So that’s how I got into radio. Everybody gets into it differently.

Tom: When you were a small boy, was radio ever part of the equation for your future?

If you enjoyed this podcast with Bill Handel, be sure to check out the rest of our podcasts here.